I purchased McCall's 7836 when it was released in 2018, with intentions of sewing this asymmetrical cut out shoulder top. However, with my major surgery, followed by the move across country, followed by months of physical therapy because of the surgery...well, it just never happened.

Until January of this year. 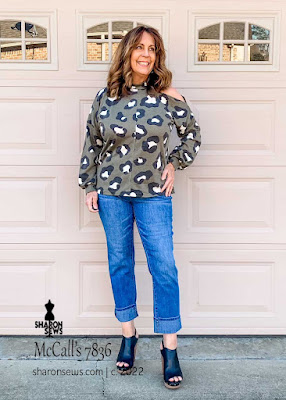 Here's the pattern cover.   I do remember sewing View B (with one with the big sleeves) before we moved, but I can't find it. Now that I'm thinking about it, I think I gave it to one of my sisters who said she liked it. 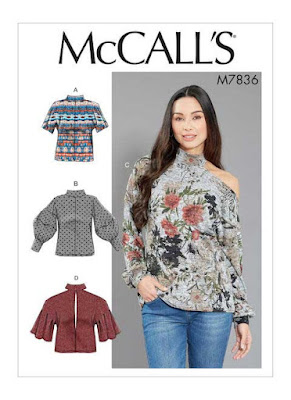 I'm glad I didn't sew this until we moved as it really is not a practical design for Minnesota winters.   It works much better here in Texas - I can wear it when it's a bit cool outside and I'm not uncomfortable even with my one shoulder exposed. 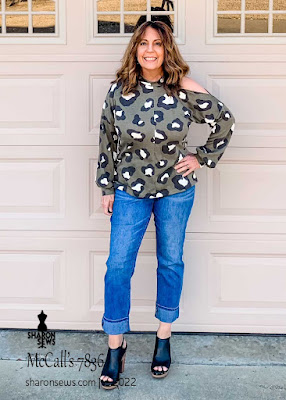 The pattern is rated Easy (I would agree) and is described as a fitted, pullover top featuring a dropped shoulder.  I was concerned it would be too fitted for my large bust so I did a full bust adjustment adding 2".  I probably could have added another 1" as I prefer a looser fit in my bust area. Because of that asymmetrical shoulder, I had to do a full bust adjustment on each front piece. 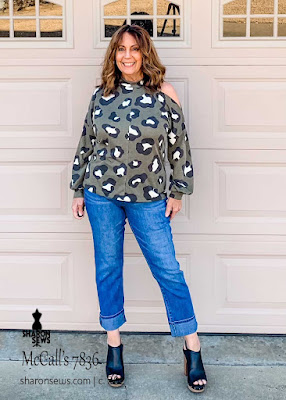 This is a size 14 in the neck/shoulder area, with the full bust adjustment, grading to a 16 at the hip.  There is a center front and center back seam.

I used my BERNINA 770QE Plus to sew the top. 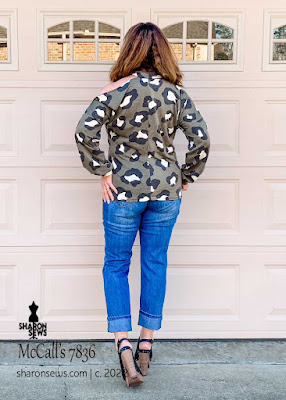 I normally stay away from turtlenecks because, well, my large chest. It's not the most flattering look on me. That's why you'll typically see me wearing a long necklace if I wear a higher neckline.  But this one I think is okay because of the shoulder being exposed. 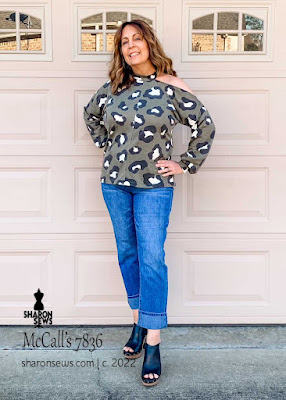 I had read a few reviews of the pattern before I sewed mine. Some sewed up the opening on the shoulder saying it was too large.  I did not do that.  I like the opening just the way it is.

Now, I am not going to wear a strapless bra when I wear this top.  And I'm definitely not going braless!  Nobody wants to see that, LOL 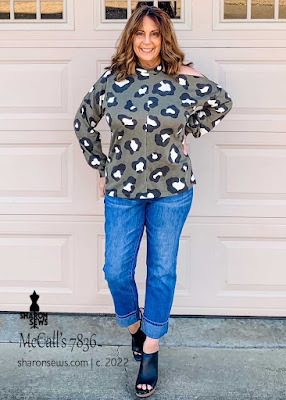 This version was just supposed to be a test to see if it fit the way I like. But once I was done I realized I liked it out of this fabric.

I used a cheap baby French Terry that I picked up at the local Walmart. It was one of those precut bundles some of the stores carry. The quality of those bundles varies greatly but I pick them up occasionally for sewing test garments. This bundle was two yards for six dollars.

I plan on sewing another, but now that we are into spring the extremely hot weather isn't far behind, so I'll likely wait and sew another next fall.

BTW, I accidentally snapped a pic as I caught myself almost falling! My left foot is still partially numb from the surgery three years ago and sometimes my balance is a bit off.   It was a reminder to me that I should probably choose lower heels these days :-) 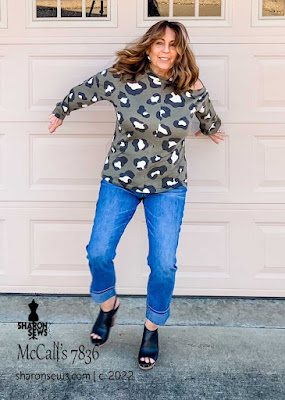