New Look 6754 -with it's front neckline pleats, bias roll collar, and sleeve options- held the promise of stylish summer tops suitable for wearing beneath a suit jacket or on their own paired with jeans. 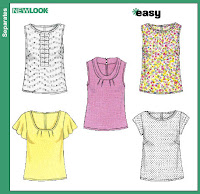 Ah, but the promise was broken.

Don't let this photo fool you. This top does not have the design elements needed to make it a winner.

While it was indeed an easy pattern, the line drawings are misleading.
I haven't sewn very many New Look patterns, but I'm not gonna lie. I've had issues with almost every single one. In my experience they have run large, so I cut this one at a straight size 12 with no full bust adjustment (FBA). In fact, I almost cut the shoulders and neck at a size 10.

The fabric was a bit ravelly so I took the extra time to encase every seam with Seams Great. The design calls for a 12" back zipper, which I was certain I could eliminate. Whew. Good thing I basted the center back seam and did a fitting. I would have been unable to get it on without the zipper.

So, I inserted an invisible back zipper, which meant I had to follow the pattern design and add a closing at the center back neckline.

After a few hours the top was completed. I eagerly put it on and grabbed the camera to capture the moment. I quickly discovered that even with a zipper the top was difficult to get on.

And that was when I first thought that this might not have been the best pattern to choose to sew. That thought was quickly confirmed when I looked in the mirror and discovered the problems I mentioned earlier.

"Eew," I thought. "This is one ugly top. I knew I should have chosen McCall's 5561." Of course my next thought was "well, there's no way this is being photographed with me wearing it. "

Of course now that it's completed I remembered to check the reviews on Pattern Review. Which confirm most of the issues I had also. When, oh when, will I learn to check PR first? Oh well, live and learn.

Broken (pattern) promises-they disappoint. But the bright spot? I took photos of the narrow hem process so I have a nice little tute.

Press under 1/4" on the lower edge. Stitch as close as possible to the pressed edge. My machine has the ability to move the needle left or right so I kept the pressure foot centered on the folded fabric and moved my needle to the edge. 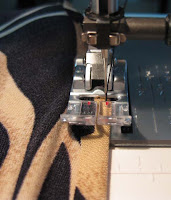 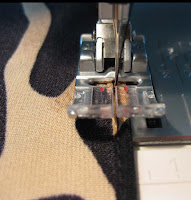 Press lightly. This is what the outside of the hem looks like when it is completed. 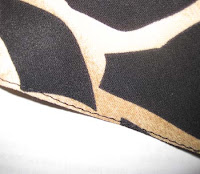