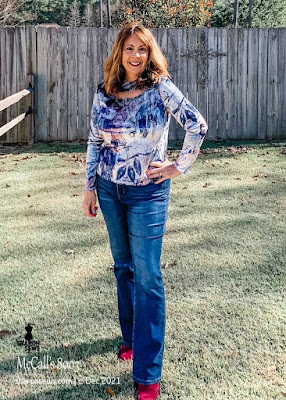 Two years ago McCall's posted this pattern as a Sew The Look on their Facebook page.  Most of the commenters hated the look!  Personally, I liked it and purchased the pattern when it was released. I sewed a test version in a black ITY knit ( blogged about here) .   I recently sewed it again, this time in a beautiful stretch crushed velvet. The pattern is McCall's 8003 which was released in 2019. It is described as close-fitting or pullover with snap closing tops, with mock collar or neckband and length variations.  It's basically a scoop neck tee with another piece placed over the upper bodice portion. Both are basted together and sewn into the armhole seam. As someone who has a large bust I typically avoid wearing high necklines or turtlenecks, even though I like them.  I think that's why I was attracted to this pattern. The small cut-out detail showing a hint of skin breaks up the large amount of fabric on my chest.  As you can see in my photos, the cut-out detail is
2 comments
Read more
More posts