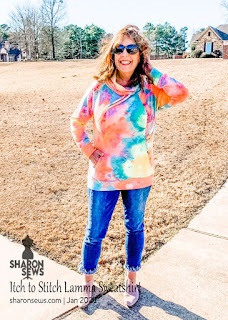 The popularity of tie dye sweatshirts doesn't appear to be waning.  A quick google search of the phrase "tie dye sweatshirt" will bring up hundreds of images.  As a fan of tie dye and comfy shirts, I decided to sew myself one.  I had purchased this tie dye French terry from So Sew English after seeing a sweatshirt Stacy ( from Stacy Sews) had posted on Instagram , back in September. When the fabric arrived I had so many other sewing projects in the works that I set it aside. In January, when I signed up to test to Lamma Hoodie and Sweatshirt pattern from Itch to Stitch, I knew I was finally going to have a tie dye sweatshirt! I have to back up here for a moment.  I'm not a big fan of sweatshirts as I don't like the way they look on me. They're bulky and shapeless. Now that doesn't mean I never wear one. For example, a few weeks ago I wore my big, shapeless sweatshirts when Texas experienced that historic snow and cold.  Believe me, I was thankful I had kep
2 comments
Read more 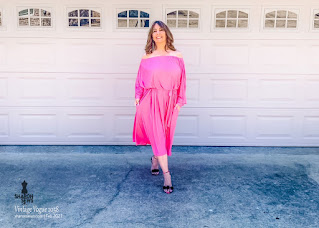 I love that we are in a season of fashion where pretty much anything goes. Or maybe it's my age showing. While I still care about trends,  I'm more comfortable in my own skin and as such wear more of what makes me happy versus what may - or may not - be in fashion.  Case in point, this dress sewn using a late 70s pattern. I dressed it up for the pics by adding heels (have I ever shared my obsession with Betsey Johnson shoes with you?) and long earrings.  In reality I'll likely wear a more moderate sandal and hoops (my go to earrings). The pattern is Vogue 2058, a Scott Barrie design from 1979.  For those of you who are not familiar with Barrie, he was an internationally famed, award-wining designer whose creations for Vogue Patterns included beautiful dresses designed for knits.  You can read more about Barrie in this FIDM Museum Blog post. This vintage pattern had been on my list of nine things to sew in 2020. Well we all know how everything rapidly changed in 2020 and I d
1 comment
Read more 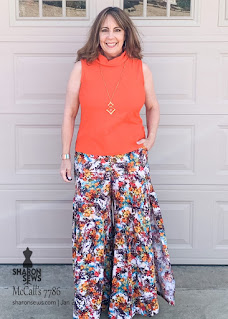 It may look like a maxi skirt but it's actually a pair of pants! The pattern is McCall's 7786. Read all about it over at Minerva .
2 comments
Read more
More posts