Fabric choices can make or break a fabulous design, such as this vintage DVF wrap dress pattern. 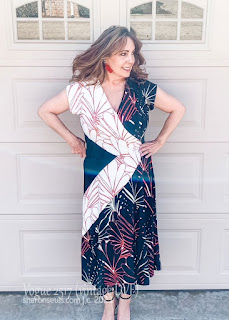 The pattern is Vogue 2517, from 1980. I don't recall where I found the pattern, but it was purchased second hand. 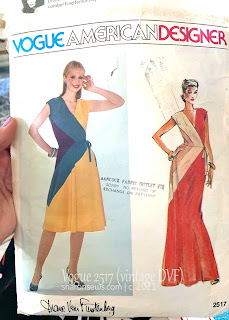 I began working on the dress about four years ago using some ITY fabric I purchased at SR Harris. Loooooong story, but I finally finished the dress a day ago. 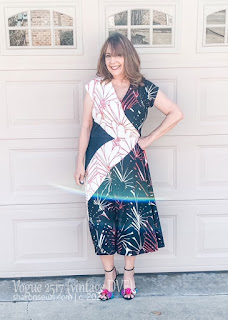 Let me explain my opening sentence.  At the time I cut out the pieces for this dress I was only focused on using three prints that coordinated.  On my cutting table these went together very nicely.  It was only after I had stitched the dress together did I realize I had given myself a built-in beauty pageant sash. Ha!Ha! 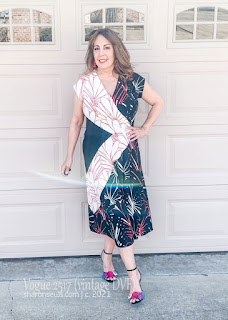 As if that wasn't bad enough, the white is so stark against the solid and print black fabrics, that is really emphasizes parts of my body that I prefer to not have all that much attention.  I think I was so focused on following the color scheme of the maxi dress (with the lightest fabric in the center) that I didn't think through what the final design would look like. 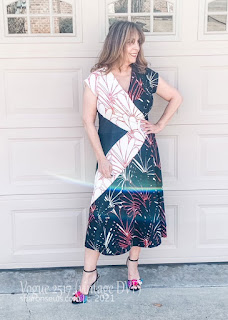 Let's talk about the construction of the dress.  It's a rather simple dress to sew.  As long as you don't need to take it apart and restitch it multiple times like I did.

It all began when I decided I needed a full bust adjustment, extra fabric at my waistline and more length in the bodice. I made the adjustments without measuring the pattern pieces or even putting them up against my body.

Big mistake.  I sewed everything together and the bodice was...hmm, how shall I say this?  It was a hot mess!  I did NOT need the extra length in the bodice as the waistline was now sitting about three inches below my waist.  I also didn't need to extra width at the waistline, nor as large of an FBA as I had done.

So I ripped it apart and re-cut the already cut pieces as best as I could to make it fit better.  I wasn't 100 percent satisfied so I tucked it away with plans to work on it at a later date when I was less frustrated.

By the way, this is a bit of a side view showing how those panels match up at the seam forming the V.  Pretty cool, huh? 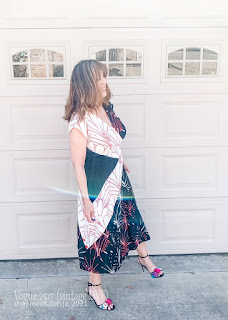 The project sat for quite a bit longer than I had originally intended. When I pulled it out again it was now too small, a side effect from a medical condition I was battling. I just didn't have the energy at that point to redo everything and tucked it away again.

Fast forward about 18 months and I decided it was time to revisit this project.  In that 18 month time period, I had surgery for that condition, discovered the cause of my weight gain, and was working on getting back to my normal weight.  Oh yea, and there was that move across country too, LOL. 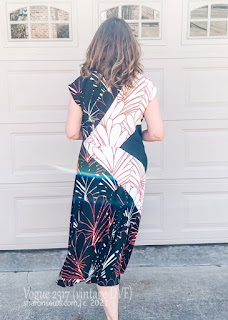 Yesterday I decided it was time to either finish it or toss it.  As you can see, I decided to finish it.  I put it on and the extra I had added previously wasn't needed.  It wasn't as large as it had been when I originally sewed it but hey, I'm happy the inflammation in my body appears to be under control. 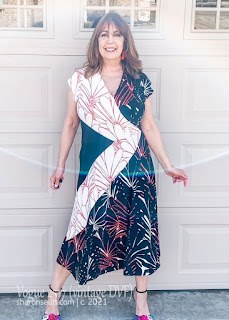 I'm not sure if this is how the original DVF dress was constructed, but the pattern included facings for the wrap front and back neck.  If/when I sew this again, I'm going to eliminate them and use a narrow binding.  Also, this is designed for a side zipper which I eliminated as the fabric has enough stretch for me to get this on and off easily.

This is a faux wrap dress, and I did forget to re-add the little ties on the left side of the dress. I may or may not stitch them on. I'm not sure they are needed.

The dress is described as finishing three inches below the knee and you can see it's mid-calf on me. I kind of like this longer length. 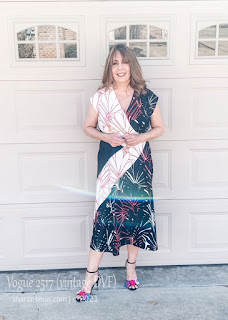 I thought the dress was quite flattering when I looked at myself in the mirror. However, when I saw the pics of me wearing it I was no longer sure. This will have to go into the closet for awhile.  I may be more interested in wearing it once more time has passed and the memory of the sewing challenges have faded.