I've been living in Texas for nearly six months now and to date have only experienced weather ranging from kinda hot, to hot, to unbearably hot (as well as a few power outages, which are not fun when it's nearly 100 degrees F outside).

I was told repeatedly that the weather would eventually cool down, but I must not have believed that because I kept sewing summer attire. Big mistake! The other day when we woke up we discovered it had dipped into the 40s. Sewing machine to the rescue! 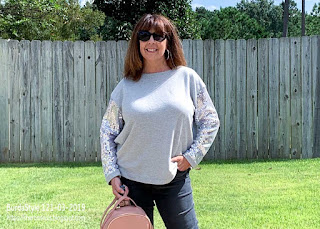 In about two hours I stitched up this lightweight sweatshirt with sequin sleeves. The two hours didn't include time to trace the pattern, as I had traced it (along with about a dozen other patterns) a few months ago when I was suffering nightly from insomnia.

The pattern is from the March 2019 BurdaStyle magazine, sweatshirt number 121.  The pattern can also be purchased as a PDF at BurdaStyle.com.  Although you could easily replicate this with any sweatshirt pattern, or by starting with a purchased top.

I used a lightweight French terry knit and stretch sequin, both purchased from SR Harris Fabric outlet before we moved.

French seams were used to sew the sequin so it would not scratch against my skin. The seams are rather wide for French seams, but I didn't want to trim too much of the sequin fabric. It'll be our little secret :-) 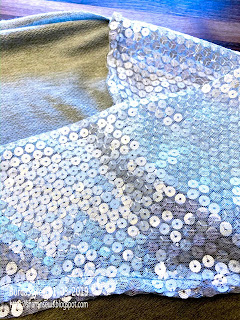 On this version, I did not do a full bust adjustment (FBA) as there was plenty of ease to fit my bust (width wise).  I did a little "cheater" FBA, and added about 1-1/2" to the front hemline, curving back to the original seam at the side seam.  This was so the top wouldn't pull up in the front. 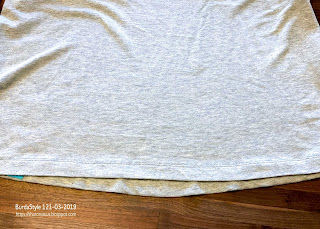 Since my surgery anything against my back neck really bothers me. So whenever possible I add my label to somewhere other than the back neckline. Here it is sewn to inside of the front hem. I've chosen to wear this casual look by pairing it with jeans, white athletic shoes, a pink backpack, silver hoops, and a tiny silver cross necklace. 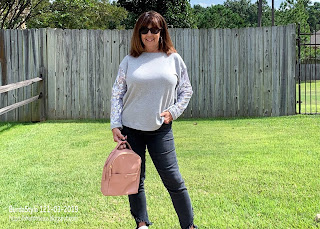 A short necklace with a little more "bling" would dress it up even more. 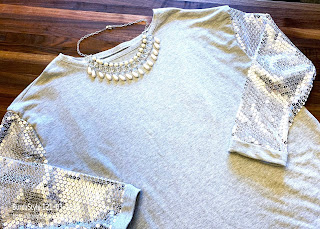 The back view really shows how boxy this sweatshirt is. Now that I've worn it (twice so far) and looked at the photos, I'm going to take this in more to add some shape. 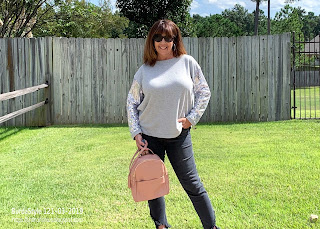 With sequins once again having their moment in the spotlight, this sweatshirt is an easy way to wear the trend while remaining casual. 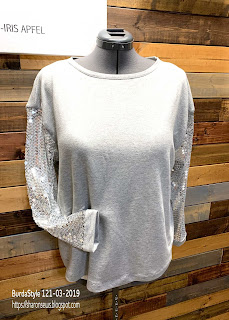 This is one design I'll be sewing again. Next time I'm going to add a small FBA, with dart, to provide a better fit on me.

By the way, I'm starting to do YouTube videos. I enjoy watching other videos on sewing, and have wanted to create sewing videos for quite some time. Since I'm currently not working I have time to do so. The last video I posted includes this sweatshirt!

When it comes to sequins I'm in the "yes, I love this trend" camp. In fact, I have plans to sew myself a sequin bomber jacket within the next month or so.

Drop me a comment below and let me know if you are a fan of the sequin trend.

Have a blessed day!