A Life Interrupted or Why I've Not Been Sewing or Blogging

"Why would I bother to have this surgery? You're telling me this surgery may not improve any of my symptoms."

"Because without the surgery your symptoms will continue to worsen, and eventually you will be completely disabled," replied my neurosurgeon.

"Oh. How quickly can you schedule the surgery? We are moving across country in three weeks."

Amazingly they were able to schedule me for surgery within a week of this conversation.

You might be curious why I needed surgery, so let's back up shall we?

About a year ago, in July 2018, I noticed one morning that I had lost range of motion in my wrists. I was practicing a Bollywood routine to teach to my Zumba Gold class and was unable to bend both of my wrists in a 90 degree angle.  Hmmm, that's odd. I didn't think much of it, deciding it was probably overuse.

But as the days went on, my wrists and hands began to ache, and pain traveled up to my elbows continuing to my shoulders. I knew it was not carpel tunnel, as I had experienced that about 20 years ago. Every morning my fingers were bent and swollen and I was losing strength in both hands. I began wearing wrist braces for support while sleeping and made myself an appointment to see my GP.

After numerous tests my GP said "you may not look your age, but the fact is you are aging, and I think this is just osteoarthritis and you'll have to learn to live with it".  Um, okay. Since arthritis is in my family, I thought he might be correct.

But my symptoms grew worse. I lost more strength in my hands (for example, I no longer had enough strength to squeeze a shampoo bottle). I noticed that I was starting to lose my upper thigh strength, that my stamina during workouts was decreasing, and it was taking up to three days for my body to recover from a workout.  (Remember, at the time I was  teaching three fitness classes a week and attending fitness classes as a student, in addition to my full-time career.) I gave up taking fitness classes and teaching two of my classes since I could no longer hold weights, or do decent squats. How could I teach if I couldn't demonstrate proper technique?  I held onto teaching my Zumba Gold class to the bitter end :-)  I kept the severity of my symptoms to myself, and as far as my students knew I was having trouble with my right shoulder.

I also reluctantly gave up sewing. It was just too painful physically. I had just signed a contract with Sew News for an article in the Dec 19/Jan 20 issue and was really bummed to have to pull out.  In addition, I had to give up the last few months as a BurdaStyle Influencer as there was no way I could sew an article of clothing even once a month.

I returned to my GP, and ended up with a referral to a neurologist. After months of visits, tests, and MRIs, a diagnosis was made. I had a syrinx. You can look it up, but its basically a fluid filled cyst inside of the spinal cord. In my case, doctors have no idea how it came to be as I had not been ill, did not have a tumor, and had not experienced any neck trauma.

Which brings us back to the start of this post. With no guarantee that my symptoms would improve, I underwent surgery on April 1.

In addition, before we knew the seriousness of my health issues, my husband had accepted a job promotion/transfer to another state. At the time we both thought that all I would eventually need was physical therapy and all would be well again. If we only had had a crystal ball my husband would have declined the transfer.

And everything seemed to happen so fast! Our Minnesota home sold before it even went on the market, meaning I had to move much sooner than planned. I had planned to stay behind and continue working while selling our home. In my mind I figured I'd be in Minnesota another three to six months, while my husband was in temporary housing working his new job. But obviously not. I ended up having to quit my job and move with my husband as I would 1) have no place to live and 2) would not be able to care for myself after surgery.


So on April 18, my husband and I (along with our two dogs) set off in our vehicle to our new Texas home.  I may be smiling, but I was in a lot of pain, and was so thankful when we stopped for the night and I could crawl into a bed. By the way, can you see the two dogs behind me? Those two were so good on this road trip! 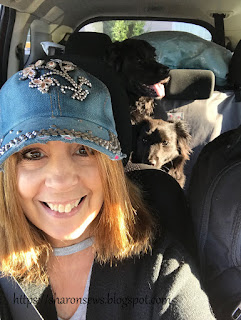 We've been in Texas for nearly two months now. I was back in Minnesota a few weeks ago for my final follow up appointment and my neurosurgeon has signed off on my surgery as healing has progressed as it should. I still have lifting restrictions of no more than 10 lbs along with no heavy housework, until the three month mark.

At that point I also have the okay to begin working out again. It will be quite humbling to start all over with a fitness program. But I have to as I have lost a lot of my strength, mobility and flexibility.


In addition, every joint in my body has rebelled, which is new since the surgery. I'm having trouble walking as my feet are swollen and my ankles and knees ache. The doctor I've seen here doesn't seem to know what to do and has referred me to a rheumatologist. The inactivity, combined with medications have caused about a 25 lb weight gain, sigh.

To further complicate matters, I've been having trouble getting timely care in my new home state of Texas as we don't live in a large metro area. It's been very frustrating to say the least. If I was still in Minnesota I know I would be under a doctor's care by now, out of constant pain, and on the road to complete recovery.

Because of my health condition I have been unable to job search until we can figure out what is happening with my joints.

Many people are praying for me, and if you're so inclined I appreciate it if you'd add me to your prayer list.

I am happy to share that I have slowly been able to return to sewing. It is difficult to cut out items due to the lack of strength in my hands, and the pain in my knees if I stand too long, but I am able to do so if I take a lot of breaks. Same with the actual sewing. If I sit for too long my body stiffens up and I have difficulty moving, especially walking. It's so weird to have been teaching dance fitness classes only four months ago, to not being able to walk very well today.


So my move to a new state has not gone as planned, but I'm still optimistic that eventually someone here will call me back to schedule an appointment with a rheumatologist (seriously, this would never have happened in Minnesota!)  Until then I will continue to sleep fitfully, wake up in pain, and slowly gain some mobility as the day progresses.

Be sure to follow me on Instagram (@thesharonsews) as I've started posting my sewing projects again.  And once I find our tripod I'll start taking pics of me wearing my new makes and start blogging again. 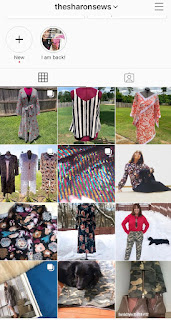 Before I close, I'd like to thank everyone who reached out to me via email, text, and direct messages to see where I was and how I was doing. It meant the world to me to know that I was missed, and your encouragement warmed my heart.