Guess what?  I sewed something from the May BurdaStyle magazine and it's not even May yet! I'm quite pleased with myself as I still have patterns bookmarked to sew from 2013 issues.  Granted this one was a simple sew, but for once I'm sewing the trend - tassel trim - before it ends. 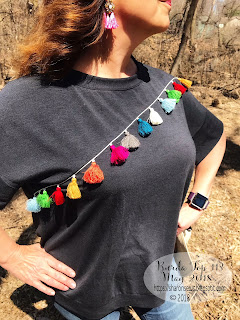 This is a simple pullover knit top number 113, from the May 2018 BurdaStyle magazine. I don't see the pattern on the BurdaStyle website yet.   Here's the picture from the magazine. I used a soft gray knit, purchased as a pre-cut from Fabric Mart Fabrics (appears to be sold out).  The multi-colored tassel trim I found in the home dec section at Hobby Lobby (looks like it can be found online too).  I washed and dried it first to see how it would look before using it on my top. 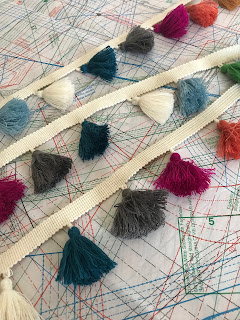 I fused a narrow strip of interfacing to the back side of the bottom edge of the upper front yoke. I wasn't sure if the trim would need the additional support or not since I was using a lighter weight knit than what was recommended. (Sweatshirt fabric is the recommended fabric.)

To add the trim to the front, I placed the trim along the upper front yoke edge right sides together. I used a zipper foot to baste the trim in place, making sure my basting line was right at the 5/8" seam allowance. I then used that basting as my guideline when stitching the yoke and front together.

The edge of the trim shows, which I like as it really pops against the gray fabric. 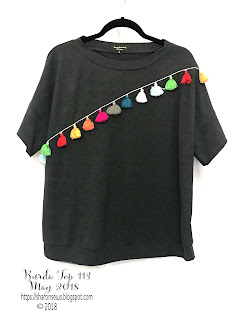 The back also has a diagonal yoke, and the two seams match up at the dropped shoulder seam. 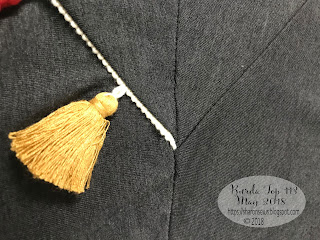 The side seams are sewn before the sleeve band is added.  I found that I needed to clip the side seams inside after adding the bands to keep the underarm flat. 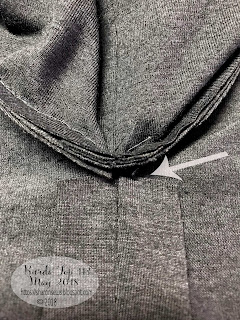 This top is very loose-fitting so I did not do a full bust adjustment (FBA) except to add about 1-1/2" to the center front. I just eyeballed it and curved the bottom edge back to the side seams. 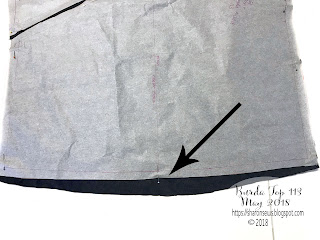 If I were to sew this again (who am I kidding? Of course I'm going to sew another!) I would go down a size in the hip area. There is a bottom band on the top, but it does not fit snug against my hips as I think is intended. 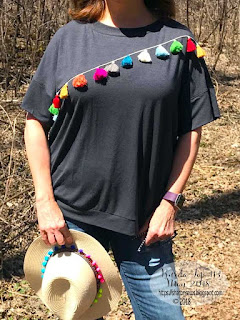 Did I mention the great tool I have for tracing seam allowances for my Burda patterns? It's the SA Curve Pattern Drafter ruler.  I purchased mine (the 5/8" size) on Amazon about nine months ago and it's been such a time saver!  (Link here - no affiliate, just love the product.)  I plan on purchasing the other sizes also. 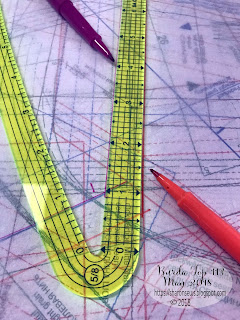 Time to sew this top was minimal. I would guess it took me about two hours, including cutting out the fabric.  I had to stitch it completely on my sewing machine as I managed to break the lower looper on my serger a month ago and I haven't brought it in yet for repair.

Fingers crossed the snow has finally left for the season, which means I can get back into nature for my photos (we had more than a foot of snow fall in one day only two weeks ago!) 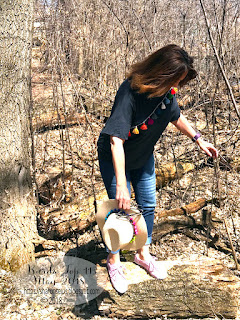 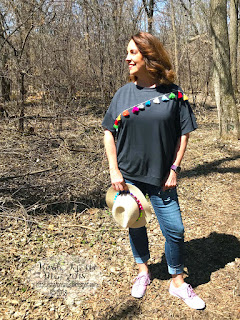 This top is my participation in Faye's Sewing Adventure 2018 Tops That Pop! Pin It
at 9:38 PM