Showing posts from December 4, 2011
Show all 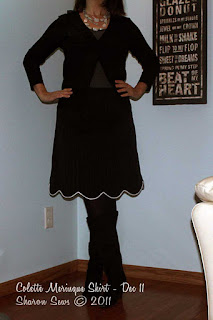 The Colette Meringue Skirt from The Colette Sewing Handbook is completed and has passed the wear-to-the-office-all-day test.  She's a keeper.  Although I will make one minor tweak on this one. More about that later. Cutting Because I used a pinstripe, I choose to cut the skirt single layer.  But I decided that after tracing the pattern pieces. So I pinned the skirt to a single layer of fabric, placed pins along the fold line, cut out one half and flipped it over along the fold line using the pins as my guideline.   Maybe not perfect. But it worked.  Aw c'mon...you guys cheat sometimes too, don't you?  {wink} Zipper The book includes instructions for sewing an invisible zipper.  Since that's about all I ever put into my garments I didn't need to reference them. But if you're not sure about invisible zips that's a plus, right? The one thing I'd suggest that I didn't see included is to fuse strips of interfacing to the wrong side of your fab
16 comments
Read more 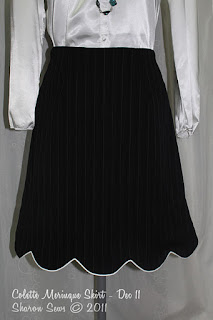