Life just threw me a curveball

- February 27, 2010
Hey sewing friends! We had a family emergency the other day and I wanted to let you know that I won't be posting about sewing for a short time. Heck, I wont' even be sewing. My beloved son found out Thursday night that he had a brain tumor. From there everything happened very quickly. It was a large tumor and the neurosurgeon said she was surprised he had no neurological symptoms or damage due to it's size. It's possible it had been growing for many years. He underwent surgery to remove the tumor yesterday, Surgery went as well as expected and we were able to see him last night in the ICU. Medical staff are all pleased with how he is doing. He's just a young man - 33 - and, except for his premature birth (and a few colds) he's always been very healthy. His only symptoms were severe headaches that began about a month ago - he'd get two or three in one day and then none for a week. They were so painful he made a doctor appointment. That doctor schedu
64 comments
Read more

Whoa, gonna need shades with this one 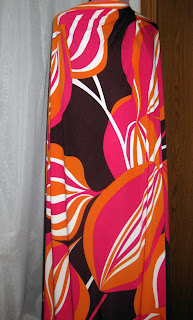 We had a brief moment last week where temperatures soared into the upper 20s, resulting in a sudden urge to sewing something for spring. Looking around my sewing studio I saw myself surrounded by lots of wool and lots of dark colors. So I did what any self-respecting fabric-a-holic would do. Indulged in a little fabric shopping over at Fabric Mart . One knit was described as "a must to brighten your wardrobe". I think that might have been an understatement. See for yourself. I dont' know yet what I'll use this one for, but I admit it does bring a smile to my face.
12 comments
Read more

Back to the 70s - flutter sleeves and flared skirts 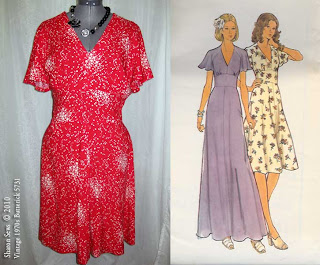 This red and cream rayon dress sewn using Butterick 5731 - a pattern from the mid-1970s. I know some may call it "vintage" but it just doesn't seem right to call something vintage when I clearly remember the clothing from the era. Granted I was quite young This dress is another completed UFO. It was never finished as I kept debating with myself over the hem length. I finally just chopped off about five inches so that it would hit me about mid-knee. The pattern was in my collection and I must admit I like the romance of the flutter sleeves and flared hem. I feel as if I need a big floppy hat also. I think it's a soft and feminine dress its design complimented by the drapey rayon fabric - and the GiGi just doesn't do it justice. The floaty sleeves and fitted midriff are better displayed on a real body. When the weather warms up I'll model it - wearing the perfect red shoes of course.
15 comments
Read more
More posts