Near the beginning of the summer season, I saw an adorable menswear top at Anthropologie. It was a simple strapless cami with an elastic waist and ruffled edge. When I saw the price of the top (originally $68, now marked down to $29.95) I immediately thought that a similar strapless cami inspired by the design could easily---and more economically---be sewn using a men's dress shirt. So here you go. A super quick tutorial on how to refashion a men's shirt into a cami. One man's dress shirt + elastic + bias tape + thread + a few hours = ruffled strapless cami. Begin with a men's button front, long sleeve dress shirt. Best to choose a size L or larger. Lay the shirt on a flat cutting surface. Draw a horizontal line from underarm to underarm. Cut the shirt along the line you just drew. If your shirt had a breast pocket, carefully remove the remainder of the pocket. Don't worry if a bit of the stitching lines still show as it will be covered by the
36 comments
Read more

Quick! Sew a summer skirt while the sun still shines 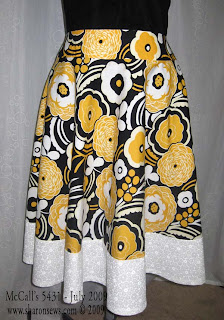 So far this summer we've experienced a week or two of "normal" summer temps followed by days of unseasonably cooler temps. Cool enough that I've been unmotivated to finish the summer garments I had planned for the season. That's why, when the sun shone and the temperature rose today into the mid 70s (F), I quickly finished this summer skirt. Who knows? I may yet have a chance to wear it this summer. This was sewn from one of my favorite skirt patterns--- McCall's 5431 . My previous versions - here and here - no longer fit (too big - yea!) so they were donated and have (hopefully) found new owners who are enjoying them as much as I did. The fabric for this one came from Crafty Planet as I'm lucky enough to live close enough to shop there. The fabric was originally destined to become a tote, but I realized it's pretty rare that I actually use any totes that I make, so a skirt it became. I'm loving the bold gold and white flowers against the
17 comments
Read more
More posts