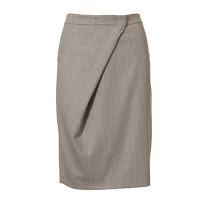 Like many of you, when my December Burda Style magazine arrived, I knew this skirt - number 112 - would be one of the first items I would sew.

Not only because I like pencil skirts, but because I was intrigued by the front diagonal pleat that gives the skirt just a little something extra.

The skirt itself it a fairly quick project to sew, and fortunately, you should be able to sew it without much need to reference the Burda written instructions.

My first step, after tracing the pattern and remembering to add seam allowances - yea!, was to play with the pattern pieces so I would understand how the buttonholes and buttons worked to create that diagonal pleat.

I have to admit it took me a few tries as I kept folding the pleat backwards. Once I had it figured out I carefully marked all of the buttonholes and foldlines on the waistband and began sewing.

There are three buttonholes sewn onto the waistband, but only two buttons are needed. That's because two of the buttonholes will line up with another another when the band is folded acting like one buttonhole. They are used for the button that shows on the front of the skirt.

Here's a photo to help you visualize. The button on the left in this photo, is sewn to the portion of the waistband that is behind the buttonhole.

That pleat is then folded over and attached to the button on the right in this photo.

And here is the finished skirt! I'll post a photo of the skirt being worn as I think it's a slenderizing silhouette. I was a bit concerned that the pleat might not lay properly creating a pooch in an area where most of us wouldn't want it, but I didn't find that to be the case.

The fabric was purchased from SR Harris recently (remember the 45 minute stash building excursion?). It is a lightweight black pinstripe wool that drapes beautifully.

I wanted to line this skirt, but couldn't wrap my brain around how to do so without adding unneeded bulk at that pleat. So I left it unlined. However, when I read Carolyn's post last night about this skirt, I had a "duh" moment when I read Marji's comment about underlining. It's the second comment in this post. By that time this skirt was already completed, but I will keep the underlining in mind for the next version.